The History of Bvlgari

Bvlgari was founded in 1884, at around the same time as the majority of Haute Horlogerie watchmakers. But Bvlgari was not (yet) a watch manufacturer, and it wasn’t Swiss. Bvlgari was an Italian jewellery firm, founded by a Greek goldsmith! It is this unique combination of cultures, styles and nationalities that has formed the foundation of Bvlgari’s rich and colourful identity.

But today, watch collectors have eyes only for one specific piece, which has revolutionised the image of the brand, and left its mark on the watch industry as a whole: the Octo Finissimo. With its powerful eight-sided shape, masculine or feminine case, and multiple complications, the Octo Finissimo is the cornerstone of Bulgari’s watchmaking output. It owes its existence to Bvlgari’s transformation into a completely integrated and independent watch manufacture, with headquarters in Neuchâtel, which gave it access to the famous “Swiss Made” label so prized by collectors.

With this new tool, the “Bvlgari Swiss manufacture”, imbued with its Italian DNA, added the final definitive touch to the historic Octo collection. By propelling the original creation into the ultra-thin segment (finissimo in Italian), Bulgari not only dusted off the genre but, at the same time, created a true icon. Today, Bulgari’s entire watch output revolves around it.

The watch has been garlanded with multiple prizes and world records, all amassed in record time: five records in five years, for the thinnest movement, tourbillon and chronograph, topped off with an award from the Grand Prix d’Horlogerie de Genève. The Octo Finissimo isn’t yet a legend, but it is already an icon. Guido Terreni, Bulgari’s director of watchmaking, has a theory: “I always say that aesthetics can provoke three reactions: ‘I like it’, ‘I don’t like it’ and ‘Wow!’ The Serpenti has that ‘wow!’ factor. The Finissimo is the masculine version, with its unusual appearance that lifts it out of the ordinary.”

The extraordinary success of the collection rests on the work of several generations of an independent family firm. Sotirio Bulgari, the company’s founding father, earned a solid reputation for his silver ornaments, which caught the attention of cosmopolitan clients visiting Rome. Thus, before the concept of brand ambassador even existed, Sotirio Bulgari built up a considerable customer base who helped to spread the word beyond the borders of his adopted country.

Very quickly, the next generation of Bvlgaris, Giorgio and Constantino, took their place in the family business. Unlike their father, they had been immersed in the style of Italy since they were born – a style based on colour, precious stones and extravagance. This jewellery style added an opulent touch to the original aesthetic of their father, who was essentially a goldsmith. After a conservative start in the 1920s, Bvlgari’s jewellery aesthetic continued to develop into the 1940s, growing into the exuberant style that we know today. It was also around that time that the company’s first true icon – the Serpenti – was born.

The era of la dolce vita in the 1960s would accelerate the company’s growth considerably. Transatlantic flights became increasingly commonplace, and the cinema was a powerful medium of cultural cross-pollination, with Italy at the forefront. Bulgari was the embodiment of Italian chic, and became the standard-bearer of Italian culture as it was exported throughout Europe and as far as the United States. The third generation of the Bulgari family began to position itself in the Middle East, and opened up to the influence of Pop Art, adding another dimension to the colour contrasts for which Bulgari had become known. It was also during this decade that the company began to explore a new horizon: watchmaking. The first watch produced by the brand was called simply “Bulgari Bulgari”. And it’s still in the catalogue today!

From that time on, Bulgari would continue to explore these two creative avenues – high jewellery and fine watchmaking – with the same intensity. The Bulgari Bulgari opened the door, and the Serpenti watch followed close behind. The Lucea brought a reinterpretation of the classic round watch, at a time when men’s watches were exploring new territories. The Octo ushered in a new era for Bulgari’s men’s watchmaking. The association with designer Gérald Genta brought disruptive new designs and a spirit of rebellion. They continue to drive the brand today, and the Octo Finissimo is their finest expression. 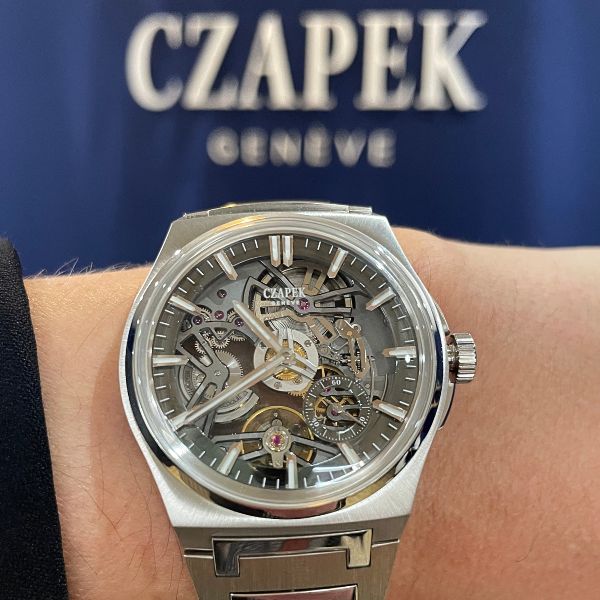